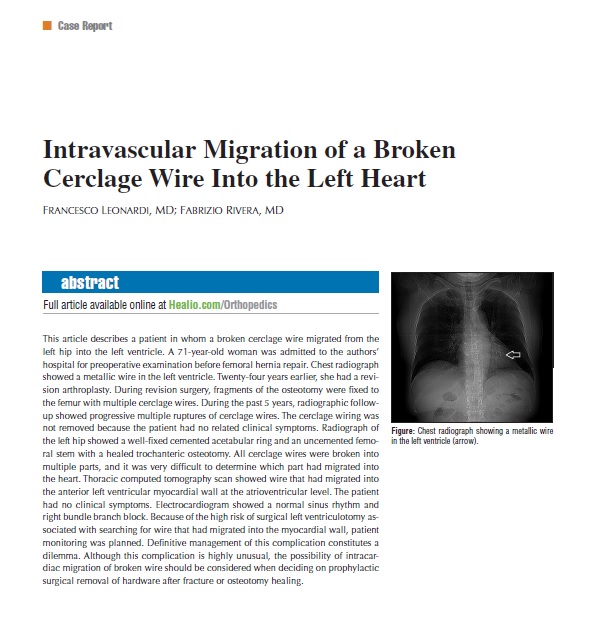 Intravascular migration of a broken cerclage wire into the left heart.

This article describes a patient in whom a broken cerclage wire migrated from the left hip into the left ventricle. A 71-year-old woman was admitted to the authors’ hospital for preoperative examination before femoral hernia repair. Chest radiograph showed a metallic wire in the left ventricle. Twenty-four years earlier, she had a revision arthroplasty. During revision surgery, fragments of the osteotomy were fixed to the femur with multiple cerclage wires. During the past 5 years, radiographic follow-up showed progressive multiple ruptures of cerclage wires. The cerclage wiring was not removed because the patient had no related clinical symptoms. Radiograph of the left hip showed a well-fixed cemented acetabular ring and an uncemented femoral stem with a healed trochanteric osteotomy. All cerclage wires were broken into multiple parts, and it was very difficult to determine which part had migrated into the heart. Thoracic computed tomography scan showed wire that had migrated into the anterior left ventricular myocardial wall at the atrioventricular level. The patient had no clinical symptoms. Electrocardiogram showed a normal sinus rhythm and right bundle branch block. Because of the high risk of surgical left ventriculotomy associated with searching for wire that had migrated into the myocardial wall, patient monitoring was planned. Definitive management of this complication constitutes a dilemma. Although this complication is highly unusual, the possibility of intracardiac migration of broken wire should be considered when deciding on prophylactic surgical removal of hardware after fracture or osteotomy healing.

This website uses cookies to improve your experience while you navigate through the website. Out of these, the cookies that are categorized as necessary are stored on your browser as they are essential for the working of basic functionalities of the website. We also use third-party cookies that help us analyze and understand how you use this website. These cookies will be stored in your browser only with your consent. You also have the option to opt-out of these cookies. But opting out of some of these cookies may affect your browsing experience.
Necessary Sempre abilitato
Necessary cookies are absolutely essential for the website to function properly. This category only includes cookies that ensures basic functionalities and security features of the website. These cookies do not store any personal information.
Non-necessary
Any cookies that may not be particularly necessary for the website to function and is used specifically to collect user personal data via analytics, ads, other embedded contents are termed as non-necessary cookies. It is mandatory to procure user consent prior to running these cookies on your website.
ACCETTA E SALVA